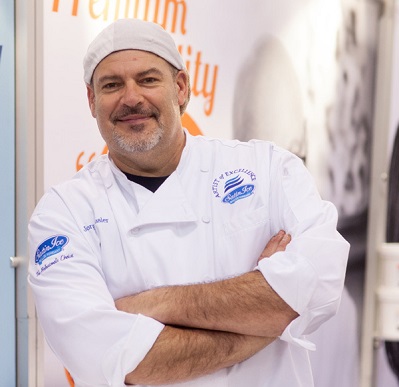 From Switzerland, to Canada, to California to the high seas – Jörg Amsler has quite a stoic and wealthy journey making pastries and cakes for clients all over the world! Having served celebrities such as Michael Jackson, Jack Nicholson as well as President George Bush – Jörg has become a celebrity in his own right. After finishing his apprenticeship and obtaining a masters in chocolate, Jörg left Switzerland to start his own business and gather experience. He set out on a journey of culinary discovery and was able to work with great chefs like Paul Bocuse in Lyon, France, Wolfgang Puck in Los Angeles, Julia Child at the James Beard Foundation in New York, and for President Bush and First Lady Barbara Bush in Kennebunkport, Maine. The Bush’s hired him as their pastry chef for functions at their summer residence.
In 1990 Jörg moved to California where he spent two years as actor James Garner’s private chef, serving stars such as Madonna, Arnold Schwarzenegger, Michael Jackson and Jack Nicholson. Eventually, Jörg started Truly Jörg’s in Boston and over a ten year period built a successful retail and wholesale dessert production, along with a full service catering business. During that time, he also filmed 10 Food Network Challenges and six episodes of Last Cake Standing. Being on both shows resulted in high demands for wedding, novelty and 3-D cakes. In 2011, he sold the company and became available for other projects that he was passionate about, notably he started to travel internationally to teach cake artistry, and started his own consulting firm – specializing in start-ups, kitchen design, production, staff training, menu development and cost efficiency. I also develop new culinary programs and cake art syllabus.

Why Coffee Program Must Match Your Pastry Quality